“YOU SHALL NOT DIE BUT LIVE!” 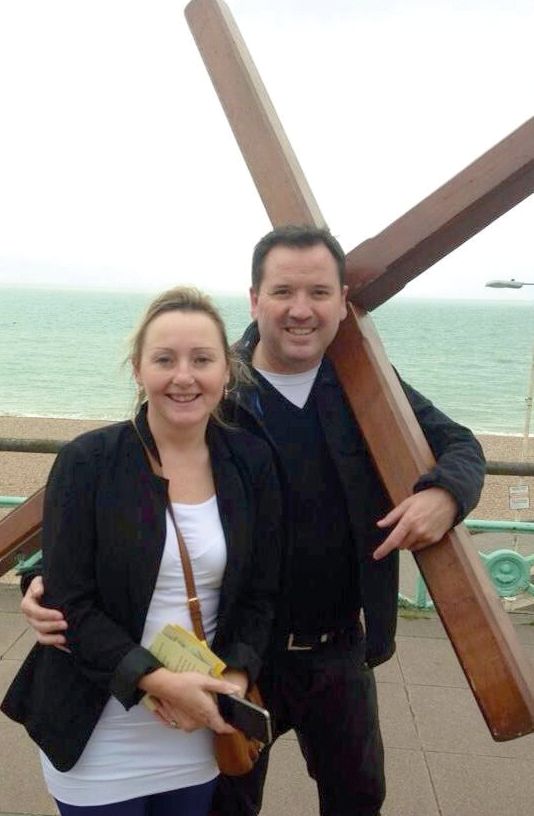 THIS SEPTEMBER CHRISTY SMITH FROM BRIGHTON IS ORGANISING THE FIRST-EVER CHURCH FESTIVAL IN HIS AREA WITH ALL FIVE CHURCHES WORKING TOGETHER TO REACH THEIR COMMUNITY.

But if people from around the world had not prayed when his life hung in the balance, the 49-year-old would now only be organising heavenly choirs! Now the pastor of Brighton’s Elim Church, the father of three would certainly never have seen his grandchildren, aged four and two.

When he was only in his late 30s, the Irishman was struck down with a severe brain haemorrhage and his family were told to say their goodbyes.

But 14 days later, Christy was able to walk out of hospital ….

He tells the story to prove that God heals and says it is just one of many examples of ‘amazing grace’ in his life, which includes being rescued out of a life of crime and drugs.

To look at him today, aged 49, it’s hard to believe that he could ever have been ill, but 12 years ago, when leading a church in Port Talbot, he walked down to his kitchen one morning and felt “an explosion” go off in his head.

“It was like someone hit me with a sledge hammer. I fell to the ground and cried out for help. Then I was rushed to hospital to be told there was a bleed in my brain and that I would be transferred to the neurological department in the main hospital in Swansea.”

The doctors had worse news. Christy was told that he had a severe subarachnoid brain haemorrhage and his brain was swelling. A gush of blood was also working into his spine which would cause non-bacterial meningitis.

“Wow, this was it”, says Christy. “My children were brought in to say goodbye and my family were rushing over from Ireland. The doctors expected me to fall into a coma and not recover.”

His son sent an email to everyone in his inbox, asking them to pray for his dying dad – the request even reached as far afield as the Ukraine. “The response was astounding”, adds Christy.

He was under pressure to have an operation, but refused it as he was told, “If you survive, you’ll be blind and crippled.”

Then, one night, a young African doctor was on night duty and he saw Christy suffering in his hospital bed. He came over and looked at his medical folder, and asked if he could pray. Christy readily agreed to the request.

“The doctor looked up to heaven”, recalls Christy, “and then he looked at me again and quoted from Psalm 35: ‘You shall not die but live’. He said to me, ‘You will recover’. Then he left and I never saw him again.”

There were a few ‘ups and downs’ over the next few days as Christy’s heart rate was irregular. Then a local church pastor visited and prayed for him when he was losing consciousness.

“I woke up a few hours later without pain for the first time in seven days. I left hospital six days later, day 14, with my wife’s help, very weak but recovering. I truly believe it was a miracle!”

Doctors told him there was the possibility of a second haemorrhage – which would definitely kill him – and fear ‘gripped’ him some 28 days later when he woke up in severe pain. Then he remembered the word of God – that Jesus said, “My Father’s house has many rooms”.

“I knew God; I had seen his hand on my life all these years. And I knew Jesus, my Saviour, the one who died on a Cross for you and me. I knew then that I did not have to fear death, because Jesus destroyed the power of death. After he died on that cross, three days later he was raised from the dead by the Father.”

Christy, who admits he was ‘terrified’ in hospital, unable to conceive of the cross-over from this life to the next, adds: “Jesus is alive now and for evermore. I was reminded that he told his followers that he is going to prepare a place for us and when the time comes, Jesus himself will bring us to that place. Waves of joy came over me when I realised this.

“I knew that death does not come for me, but Jesus comes to take me to the place he has prepared for me, so that I may see the Father. A place in heaven with no more pain, no more tears and no more sickness.”

All fear left Christy and he felt ready to meet Jesus, whenever the Lord was ready to bring him to the place he had prepared for him.

Christy first became a Christian in 1986, when he worked as a newspaper vendor on the streets in Dublin. Back then he was embroiled in crime and drugs.

Then a persistent woman, who looked like a ‘trendy nun’, kept telling him that Jesus loved him. She read him John 3:16 and gave him a copy of ‘Run Baby Run’ by American evangelist Nicky Cruz.

Later, sitting with ‘stolen goods all over [his] flat’ he and his future wife Linda gave their lives to Jesus. Christy went on to Bible College in 1990, and then became a church pastor in 1998, leaving to minister in the south east in 2004.

Christy has also served as a police chaplain in Haiti, and he and his wife sponsor an orphanage there.

Details of the orphanage are on p2 of the Heart of Sussex newspaper (Aug/Sep edition) in Brighton Elim’s new Partner Church box. The Churches Together Love Patcham festival is in the Events section of the print edition.