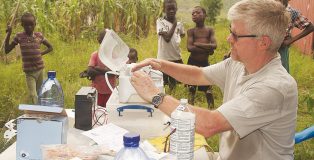 Ian at work in an African village, before being kidnapped

Christian missionary Ian Squire was shot dead by one of his kidnappers in Nigeria after performing ‘Amazing grace’ on his guitar.

Ian, a 57-year-old optician from Shepperton in Middlesex, has paid the ultimate price for his devotion to poverty-stricken Africans.

Initially it was thought that he had died because he could not reach his diabetes medicine, but Dr David Donovan said Ian was trying to cheer up his fellow captives before a gang member opened fire. END_OF_DOCUMENT_TOKEN_TO_BE_REPLACED