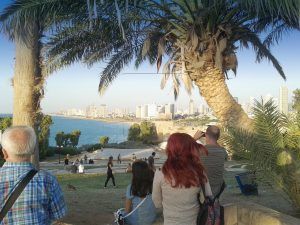 The very first line of the Lord’s Prayer stresses the importance to God of the great sign of our age – the return of the Jews to their ancient land.

It has long been understood from the Scriptures that Christian support for Jewish ‘aliyah’ (immigration to Israel) is expected, but in the opinion of esteemed theologian Dr Fred Wright, it is absolutely fundamental.

This, he says, is because the opening petition of the prayer Jesus taught his disciples – repeated by millions of Christians worldwide on a regular basis – focuses prominently, among other things, on the return of the exiles.

“Hallowed be thy name” – or “may your name be sanctified” in more modern versions – is obviously our Lord’s priority.

Dr Wright points out that there is only one portion of Scripture that explains how the Lord’s name may be sanctified, and it is found in a passage from Ezekiel chapter 36 (beginning at verse 16) that, in the Hebrew Bible, is headed ‘Kidush ha Shem’ (The sanctification of God’s holy name).

Jewish exile is a consequence of their rebellion against God whose holy name is constantly profaned while they remain in foreign lands:“… for it was said of them, ‘These are the Lord’s people, and yet they had to leave his land’.” (v20)

So it is out of concern for his holy name, which they have profaned (a word used four times in this short passage) by their exile, that the Lord will bring them back (vv24-26).

Of course, it is also true that God would wish his name to be hallowed in every way. Yet on 14 occasions throughout this passage, the Lord says “I will” in respect of a benefit of Jewish resettlement in their ancient homeland – not just for his people, but for everyone including his own reputation; even the desolate land would blossom like a rose.

Their return would also hasten their national salvation and the coming of their Messiah (Zechariah 12:10, Romans 11:26, Revelation 1:7) and the Church would benefit from the richness of its Hebraic heritage (Romans 11:11).

The return of the exiles from the four corners of the earth is of course a fulfilment of many biblical prophecies, thus confirming the reliability of the Scriptures, and is a ‘banner to the nations’ of the imminence of God’s rule through the Jewish Messiah. (Isaiah 11:11)

And so, although the modern nation state of Israel may be seen by many (including Christians) as an irrelevant political issue to be avoided, it is in fact the complete opposite.

It is the greatest sign of our times, confirmed not only by the Scriptures (Genesis 15:18f, Isaiah 43:5f), but also by the 1920 San Remo Treaty when the major powers representing the victors of World War I ratified Britain’s Balfour Declaration of 1917 through which we promised to do all we could to prepare a home in their ancient land for the Jewish people.

The right to the territory then known as Palestine was thus passed to the Jews under international law, a fact conveniently forgotten or ignored by many of today’s politicians and media outlets.

As I write, preparations are in hand to celebrate the centenary next April of this historic treaty, signed on the beautiful Italian Riviera by British Prime Minister David Lloyd George and others. And the occasion will be used to remind Britain and other nations of their grave responsibility to honour commitments to God’s chosen people. (In a shocking surrender to Arab threats, Britain later broke their pledge).

At a time of national crisis, we surely need to take special note of Isaiah’s warning: “For the nation or kingdom that will not serve you will perish; it will be utterly ruined.” (Isaiah 60:12)

So remember, when you pray “Hallowed be your name”, that you are also pleading for the return of the exiles in order that God’s reputation will no longer be profaned. And this great phenomenon will clear the path for his Kingdom to come!