Pray for protection for all citizens – Jewish, Muslim, Christian – and for jobs to be created to replace those lost during lockdown, and for immigrants and Holocaust survivors to have all they need. See pages 8-10 for more Israel prayer topics.

574 every day; 23 every hour; 1 every 2½ minutes – the current death toll for unborn British babies. (From Christian Concern)

Pray for a realisation that babies are alive and sentient from conception, so tiny lives really do matter.

Author Steve Maltz, who has just written a book called ‘Flockdown’, says: “Lockdown has seen the unprecedented separation of the Church’s flock from their places of worship. Could it be that this is not about the virus, or even the virtual world it has forced on most of us, but, rather, that it is a window of opportunity provided for the Church?”

Pray that believers will be able to reach those who have been quickened during lockdown.

May the repentance of Christians over abortion, among other ills, be heard across the nation.

Christian ‘hysteria’: Pray against fatalism in the believing Church among those who think that they’ll be ‘raptured’ before the great trouble (“tribulation”) begins, on the one hand, and a Christian hysteria on the other hand, warns Rev Mark Weeden of King’s Church Arundel. Neither mindset is conducive to impressing friends and neighbours with your inner peace that passes all understanding! Rev Weeden says, “Although the things forecast in the book of Revelation will come upon the earth, may we all realise the need to ‘stand in the gap’ (Ezekiel 22:30) and realise that God is still listening for the intercessory ministry of his Church.”

Pray for peace on the streets in the UK and USA, and respect for property, including the business premises of ordinary people who have already been hit hard financially.

Pray for food supplies in Third World countries. Israel Fernando, a pastor in Zimbabwe, told Living Word Ministries: “Our people are beginning to feel the pinch of the pandemic, not necessarily the virus, but glaring hunger. Most people in my church are now going for one meal a day.”

Remember India, where millions were locked down but went hungry because they lived on what they could earn each day.

Pray that the NHS retains its efficiency and catches up with the huge backlog of cases and treatments interrupted by the Covid scare. Professor Karol Sikora, the eminent oncologist, has increased his estimate of extra deaths caused by undiagnosed conditions from 50,000 (already more than the current official Covid deaths figure of 45,000) to 300,000, particularly including those whose treatment was interrupted.

Pray for the thousands who suffered the cruel effects of being forbidden to see loved ones in care homes or hospital or even hold a proper funeral. Great forgiveness will be needed if it is discovered that the virus was not as deadly as declared.

Autistic people have been put at greater risk, according to Nick Cohen, writing in The Spectator, because they do not understand the extra health precautions.

Creeping euthanasia: Adults with learning difficulties were reportedly more likely to have ‘DNR’ (do not resuscitate) put on their hospital notes as a form of euthanasia creeps in.

Pray against the confusion in the number of vaccines being developed and funds being wasted. Pray the virus will die out naturally like the Sars-Cov-2 epidemic. Pray for a natural immunity to develop throughout the population. Pray that any vaccine developed will not be made compulsory and that there is no subsequent flu virus this winter. Declare Psalm 91!

Face masks: Pray for the fear of God, not the fear of man, (Matthew 10:28) to come upon the Church and NHS. Pray that rulings about wearing masks are not made permanent but reviewed regularly; that masks are restricted to medical professionals and those with genuine medical conditions, on the advice of doctors.

Truth in media and government

Professor Karol Sikora said on breakfast TV that he did not believe a vaccine would be needed because the virus would “peter out”; may the media be fearless in presenting a range of views and voices heard that oppose the official mood of hypochondria.

May the true death statistics become known. Covid-19 is being given as cause of death instead of long standing co-morbidities.

Pray for a restoration of democratic government; before the summer recess the Lords were angry at being denied time to scrutinise legislation. This has left shoppers required to wear masks until at least September when Parliament sits again. There were complaints of “government by diktat”.

Pray for relief and protection for domestic abuse victims; there was an 80 per cent increase in calls to abuse helplines in the first three months of lockdown (Radio 4 report, 24 July).

Child abuse: “There’s a campaign to restore safeguarding after a 36 per cent increase in reported child abuse cases to the NSPCC, while another 10 per cent of calls have gone direct to Social Services. There has also been treble the amount of domestic violence, including murders,” says behaviour analyst Leah Butler-Smith, who has started a non-political campaign group, Keep Britain Free, to expose corruption, protect the vulnerable and hold the media to account.

‘No deal’ Brexit looks likely: Britain was reportedly close to abandoning hopes of a deal with the EU by the end of the Brexit transition period on 31 December 2020. “The government’s working assumption is that Britain will trade with Europe on World Trade Organisation terms” (Daily Telegraph, 21 July). Pray for “God’s Brexit”, on his terms.

Pray against a potential severe limiting of the UK government’s capacity to support its own economy. If a Free Trade Agreement (FTA) cannot be concluded before 31 December, the UK must urgently contemplate withdrawing from the revised Irish Protocol or else the EU will be left in control of State Aid (also known as subsidies).  Adapted from an article by Prof David Collins, who heads the City Law School’s Digital Trade Research Group.

We met in late July, with a real sense of urgency, and have a strategy to share. 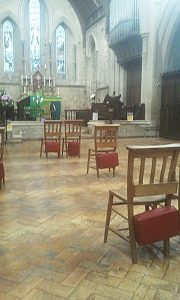 There were only slightly more chairs than stations of the cross in this beautiful old Sussex church that was still only open for private prayer at the end of July. May faith for healing revive

The true Church of God must ‘arise and shine’, not try to blend in. We must exercise our God-given spiritual authority before we lose what precious freedoms we have.

This year especially, the Feasts of the Lord have been powerfully significant. Whether we realise it or not, at Pentecost we entered a new season where the Lord will re-position and empower his Church.

We must prepare carefully to enter the season of the Autumn feasts (Moedim, appointed times), in order to best synchronise with heaven. Trumpets is on 18 September and 28 September is Yom Kippur; in between is a time of deep repentance, known as Days of Awe. It is believed destinies are sealed for good or bad over that period.

Rabbi Jonathan Cahn is calling for a day of ‘Return’ on 26 September.

Please spend time seeking the Lord and standing in the gap for our nation, for her destiny to be restored. Please make your voice heard in heaven, that we may return to the Lord and his ways before judgement is decided.