For all the never agains, anti-Semitism did not die at the end of WW2. It is rising like a hydra. What is driving it?

Inflammatory rhetoric plays a big part. The gunman responsible for the Yom Kippur shooting in Halle, Germany, blamed the Jews for all the evils in the world.

Old lies demonising the Jews are being resurrected. The latest political variant, BDS (the Boycott, Divestment and Sanctions Movement) is based on a lie about the legality of Israel’s land ownership.

Yet in rejecting Israel as God’s chosen people, we reject the God of Israel. As Nazi Germany experienced, there are consequences for touching the apple of his eye (Zechariah 2:8).

An Iranian-born pastor sees a direct link between Iran’s massive 2018 earthquake and the country’s anti-Semitism:“The plagues of Egypt have come upon Iran. Recent floods following prolonged drought ravaged hundreds of villages and nearly destroyed over ten cities in the fertile south-west. The sky is darkened through sandstorms caused by mismanagement of the land.

“Before entering the classroom, every child in Iran has to stamp on the Israeli flag”

“Heart disease and depression are widespread. Frequent smog alerts in Tehran (2017-2019) warn the vulnerable to stay at home. In Iran it is a sin to laugh, but not to kill and rape.”

Addressing his Farsi TV audience, which reaches 14 million Muslims, he challenged the ayatollahs: “For 40 years since the Islamic Revolution every child in Iran, before going to school or entering the classroom, has to stamp on the Israeli flag and proclaim, ‘Death to Israel, death to Israel!’

“What are you doing with this cursing? Neither Indonesia, Bangladesh, Pakistan or Saudi Arabia do that, although they are Muslim. I am not threatening you; I am simply informing you that whoever curses Israel is under a curse.”

While the Iranian regime continues to threaten Israel, Iranians are turning in tens of thousands from Islam to Christianity. Untrammelled by replacement theology, which teaches that God has finished with Israel, they are a challenge to us in the West with their love for Israel and the God of Israel.

The late Mother Basilea Schlink wrote in 1958: “Blessed is the nation and the man that do good to Israel. Such acts bring joy to the heart of God, which overflows with love for his people.”

A free booklet on religiously-driven anti-Semitism in the West can be downloaded here: 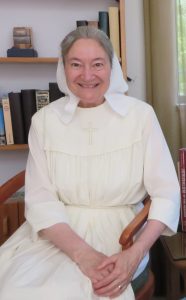 Sister Anastasia Kennedy: “Anti-Semitism is rising like a hydra”