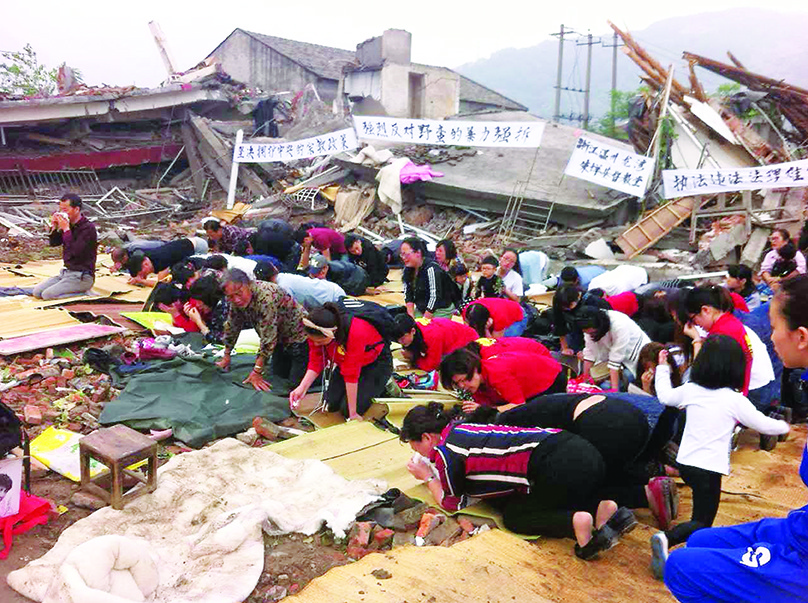 Fearful of the Church’s massive growth, China’s authorities are tearing down crosses and replacing them with national flags, limiting congregations to 20, dragging Christians off to ‘re-education’ camps and using face-recognition technology to spy on worshippers

Christians in China are now suffering the worst persecution since the Cultural Revolution.

Earlier this year, the government introduced legislation banning churches from teaching the Bible, so Sunday schools and theology courses are now illegal.

The new laws also restrict the number of people allowed to attend church. The Chinese contacts of Derek Prince Ministries (UK), for example, say they have been told that if more than 20 people attend a meeting, they would be fined 10,000 yuan (£1,150), because local officials have been given more power over churches.

Bibles are now banned from being sold online and schools in some regions have been told to divulge the religion of each student.

As part of the crackdown, churches across the country are facing pressure to openly display their allegiance to the Communist Party.

In some regions government officials are forcing churches to tear down their crosses and replace them with the national flag. And as well as the national flag, all churches in Xinyu County have been ordered to display a picture of President Xi Jinping and posters extolling socialist values.

According to Release International’s partner Bob Fu of China Aid, persecution is now at its highest level since the Cultural Revolution of 1966-1976. He told the Washington Times: “We documented persecution against 1,265 churches, and 223,000 people… That is just the tip of the iceberg.” Of those, 3,700 Christians were arrested.

Churches have been closed and destroyed, pastors imprisoned and their lawyers detained. Torture is being used to extract confessions and force Christians to renounce their faith. As a result, many Christians are meeting in secret, as they had to do under Chairman Mao.

A US government report on religious freedom has described China as carrying out a “far-reaching strategy to control, govern and manipulate all aspects of faith”.

The authorities are labelling churches ‘evil cults’, have forbidden prayer meetings in homes – under threat of demolition or house confiscation – and banned Christians from sharing their faith with anyone under 18.

Face recognition cameras have been installed in churches to spy on congregations and preachers, and Christians have been sent to re-education camps. In Jiangxi Province, poor people have been threatened with cancellation of their welfare benefits if they attend church.

The atheist state has been shocked into action by the growth of the Church. There are now said to be more Christians than members of the Communist Party.

Release International has launched a petition calling on China to repeal the new regulations. You can sign it at: releaseinternational.org/china-petition.

Last year China’s President Xi was accorded a full State visit, in keeping with China’s economic muscle. But while the West relies on Chinese-made goods, Chinese Christians are suffering terribly. So would you – could you – boycott Chinese goods? Write to letters@heartpublications.co.uk