Backlash against abortion and gay marriage in N Ireland 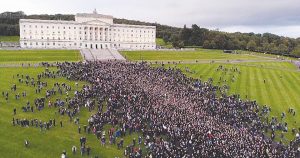 Christians in Northern Ireland are strongly resisting the imposition of abortion and same-sex marriage on their province by the UK Parliament.

The main denominations are refusing to conduct same-sex weddings. The Presbyterian Church in Ireland (PCI), the Church of Ireland and the Methodist Church of Ireland have all stated that they will maintain biblical marriage. The Democratic Unionist Party is likely to propose legislation to defend churches who take that view.

Since abortion was legalised, over 600 GPs have refused to conduct the procedure

Meanwhile, hundreds of doctors, nurses and midwives in the province have stated that they will not perform abortions. Carrickfergus GP Andrew Cupples told The Independent that some doctors “are planning to walk away from the healthcare service if they are forced to participate in abortion services.”

Cupples has sent a letter of protest to the Northern Ireland Secretary that has been signed by 911 health professionals.

According to Faithwire, since abortion was legalised, over 600 GPs have refused to conduct the procedure. As a result, abortion is only available in 19 hospitals.

The Christian Institute’s Callum Webster says: “It is vitally important that citizens across Northern Ireland respond to the public consultation and speak out to protect the unborn children and warn of the dangers of liberalising these laws.”